In this post, you’ll learn the difference between microphone level and line level, as well as other levels commonly used in professional audio such as instrument level and speaker level.

What is the difference between microphone level and line level?

Microphones and instruments output very low signal voltages, while +4dBu is the line level is the standard voltage level for professional audio equipment.

A microphone preamp takes in a mic level signal, amplifies it, and outputs a line level signal. This is controlled by the gain knob on your mixing console, audio interface, or outboard mic pre. A preamp can also be used to boost instrument level signals to line level. Once an input signal is brought up to line level, it is optimized for use with professional audio equipment, such as mixing consoles, outboard effects, and amplifiers. 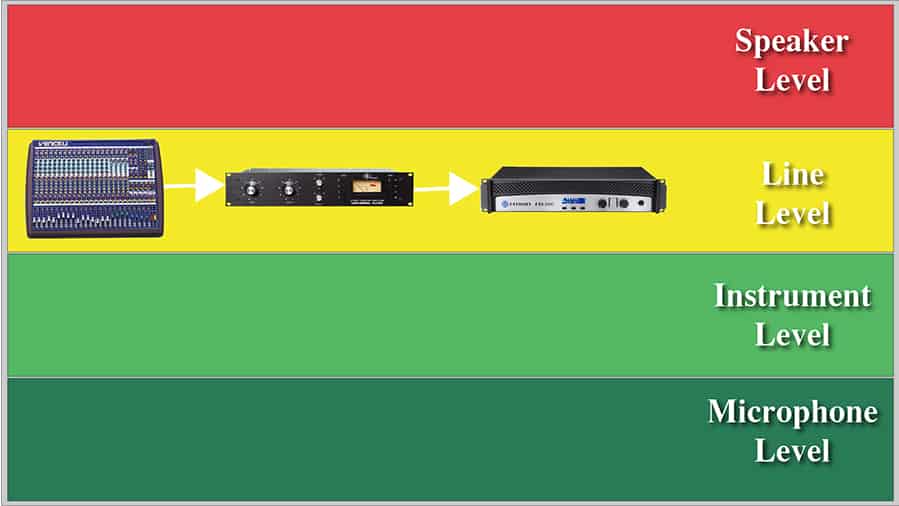 There are two standards for line level: +4 dBu (professional) and -10 dBV (consumer).

This can be done with a power amplifier. A power amp takes in a line level signal, amplifies it, and outputs a speaker level signal that is strong enough to power a speaker. In a complete system, you might run a microphone through a preamp and an electric guitar through another preamp.

Once those signals are at line level, you can send them through outboard effects and eventually to an amplifier, which will add enough gain to the signal to power a speaker.